According to the latest report by the American Society of Plastic Surgeons (ASPS), Americans spent more than $16 billion for cosmetic treatments and plastic surgery in 2016. More than ever before!

Breast augmentation surgeries, typically breast implants, outpaced other surgeries with nearly 290.467 operations nationwide, followed by liposuction (235,237 surgeries) and 223,018 rhinoplasty surgeries across the U.S.. In Comparison buttock augmentation – namely butt lifts (BBL) and butt implants – is  at a relatively low level with 18,489 procedures in 2016. However it is the fastest growing sector of plastic surgery procedures in the United States. The rate of people undergoing buttock lifts rose 252 per cent from 2000 to 2015. Dr. Sacha Obaid, plastic surgeon and member of the ASPS, explains the trend with a changing ideal of beauty: „What we are seeing is that American culture is finally expanding its concept of beauty. Twenty years ago there was one way to be pretty in America and that was to be as skinny as possible. Now, we are finally starting to embrace that there are lots of ways to stand out, and one of the fastest growing ways is with a fuller, rounder butt!“ 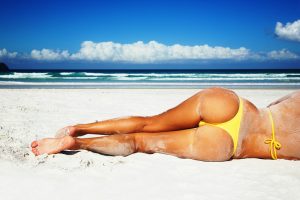