Penis enlargement surgery can comprise enlargement of the length or the girth. Often both procedures are combined. 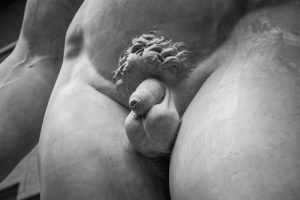 The penis has an external and internal part – hidden within the body. It is attached to the pubic pone through the suspensory ligament. In a penis enlargement surgery the penis is disconnected from the pubic bone to be liberated. This facilitates a further exterior appearance of the penis. That means, the penis itself is not enlarged, but it is basically freed from its hide-out within the body. A small incision (about 3 cm) is needed on the base of the penis, a small scar that is normally hardly visible shortly after surgery.

If the pubic area is voluminous with fat tissue, liposuction is performed to eliminate any unwanted fatty cover affecting parts of the penis. All procedures aim to make the penis visible in its full length. The angle of elevation of the penis in erection may be reduced to 90-120 degrees, but this is normally no issue.

If the scrotum inserts distally on the penis, it can be placed closer to the penis base and assist in a visual lengthening of the penis.

In addition, or as a stand-alone procedure, a thickening of the penis is performed. The options are the body’s own fat transferred to the penis or foreign products such as hyaluronic acid. The advantages in using the body’s own fat are manifold. There is no foreign body reaction, it will not be reabsorbed within time and it can easily be repeated after three to six months if a further girth increase is desired.

Before considering penis enlargement surgery, it is important to have a look at realistic mean measurements of penis length and girth. A lengthening of the penis of about 1-3 cm (0,4-1,2 inches) can be achieved with a median of about 2,3 cm (barely 1 inch), basically in flaccid state! In erection, the lengthening is normally just minimal. The increase in girth as well is about 1- 3 cm (0,4-1,2 inches), and mainly the same in flaccid state.

Duration of the surgery:

about one week; depending on the job situation, the patient is normally able to work the next day

Abstinence from physical workout and sports for 6 weeks, as well sexual intercourse for 3-6 weeks; otherwise normal daily routine and walking is allowed so long as it does not bring discomfort or pain.

Normally fit for flying after 1 week